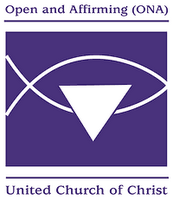 The central affirmation of an ONA congregation is that “gay, lesbian, and bisexual people” (or “people of all sexual orientations”) are welcome in the full life and ministry of the church.

In light of the growing awareness of the interrelatedness of sexual orientation and gender identity, The Coalition for LGBT Concerns also encourages the inclusion of transgender persons and information in ONA processes and in ONA statements (where the phrase those of “all gender identities” might also be used).

UCC settings (local congregations, campus ministries etc.) become “officially ONA” by adopting an “Open and Affirming” statement expressing this welcome and sending this (with date adopted, body which took the action, and request to be publicly listed as ONA) to The Coalition’s ONA Program.

There are currently more than 700 churches listed with The Coalition as ONA. In addition, there are a growing number of ONA new church starts, campus ministries, ONA-Spirited Youth recognitions, UCC Associations, and UCC Conferences which have adopted an ONA resolution. We also list “Congregations in Conversation with the UCC” (welcoming churches which are in the early stage of development or are part of another denomination but considering joining the UCC).